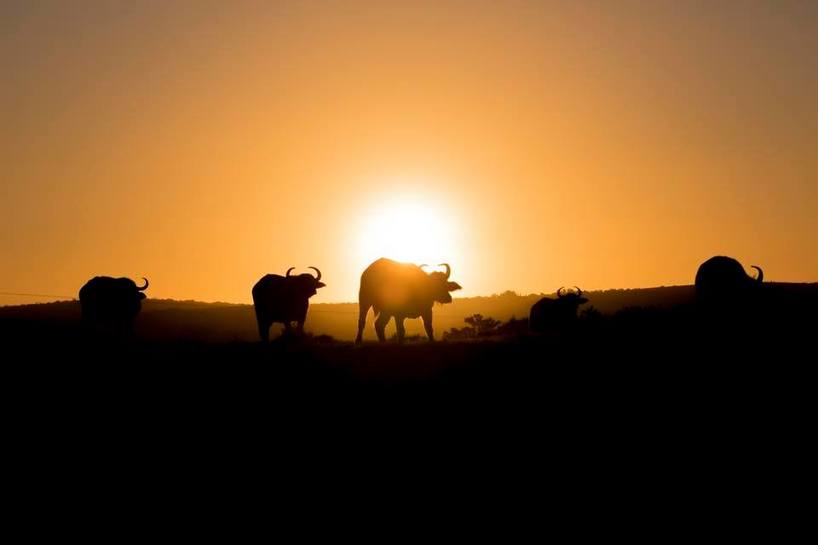 Safari guests visiting Kariega Game Reserve in South Africa often ask to see the Big 5 - lion, leopard, rhinoceros, elephant, and Cape buffalo. The term Big 5 was originally used by hunters, and refers to the five most difficult African animals hunt on foot. Although no hunting is allowed on our private game reserve, the expression "Big 5" is regularly used by safari guests.

One of the most commonly seen members of the Big 5 is the Cape buffalo. These large bovids can regularly be spotted as they graze in herds on the African plains. We have included 10 fascinating facts about Cape buffalo. We hope you have enjoyed learning more about these big bulky bovines. We look forward to welcoming you, your family and friends to Kariega Game Reserve to show you these and many other unique creatures during your safari. If you would like to make an enquiry or booking at any of our five safari lodges please contact us via our online form. If you have been to Kariega Game Reserve before and had the opportunity to see Cape buffaloes, please share your photographs with us and we will enter them into our annual Kariega Facebook Photo Competition. This year's competition opened on 1 May 2020 and will close on 30 April 2021. Wildlife photos from any Kariega safari are welcome. Photos do not have to be taken during this time period. The prize is an all-inclusive two night stay for two at Ukhozi Lodge.