Many of you will have watched the remake or seen the original 1994 film The Lion King. The characters in this film are all based on southern African wildlife species. You can see most of these species in real life at Kariega Game Reserve in the malaria-free Eastern Cape safari area in South Africa.

What would The Lion King film be without Timon the meercat and Pumbaa the warthog? These two animals become friends and travel the African plains together looking for things to eat. Their catchy song “Hakuna Matata” can get stuck in your mind for days but will hopefully remind you that your shouldn't worry!

There are lots of fun facts about warthogs and we have included a few shared by some of our Kariega safari guides. Please let us know any other facts that you learned when watching The Lion King, while on safari or add any questions as a comment below. We look forward to hearing from you. The name warthog comes from the big wart-like structures that are found on their faces. These warts are made of of fatty deposits. Male warthogs have two sets and females only have one set. These are thought to serve as protection when fighting with other warthogs.

Warthogs are not the most attractive animals on the African savannah but they don't seem to mind! They can often be seen while on safari running with their tails up, stopping suddenly to look around, shoveling dirt with their strong snouts and rolling in mud puddles when the opportunity arises.

Warthogs seem very happy go lucky but they can be very fierce as well. This is necessary as they are a preferred meal for predators such as lions, leopards, cheetahs and hyenas. Warthog piglets can also be caught and eaten by jackals, caracals and even eagles.

Warthog have many different ways to try to protect themselves and their sounder (group) from hungry predators. Starting with the head of the warthog you will notice big white tusks protruding to the side of their snout. These are modified canine teeth and used for protection against danger, fighting with other warthogs and digging for food. When fighting the big tusks are used along with their, even more dangerous, razor sharp teeth. The teeth on their lower jaw are kept sharp by moving them against the upper tusks. These sharp teeth can slice through the skin of a predator in one swipe. 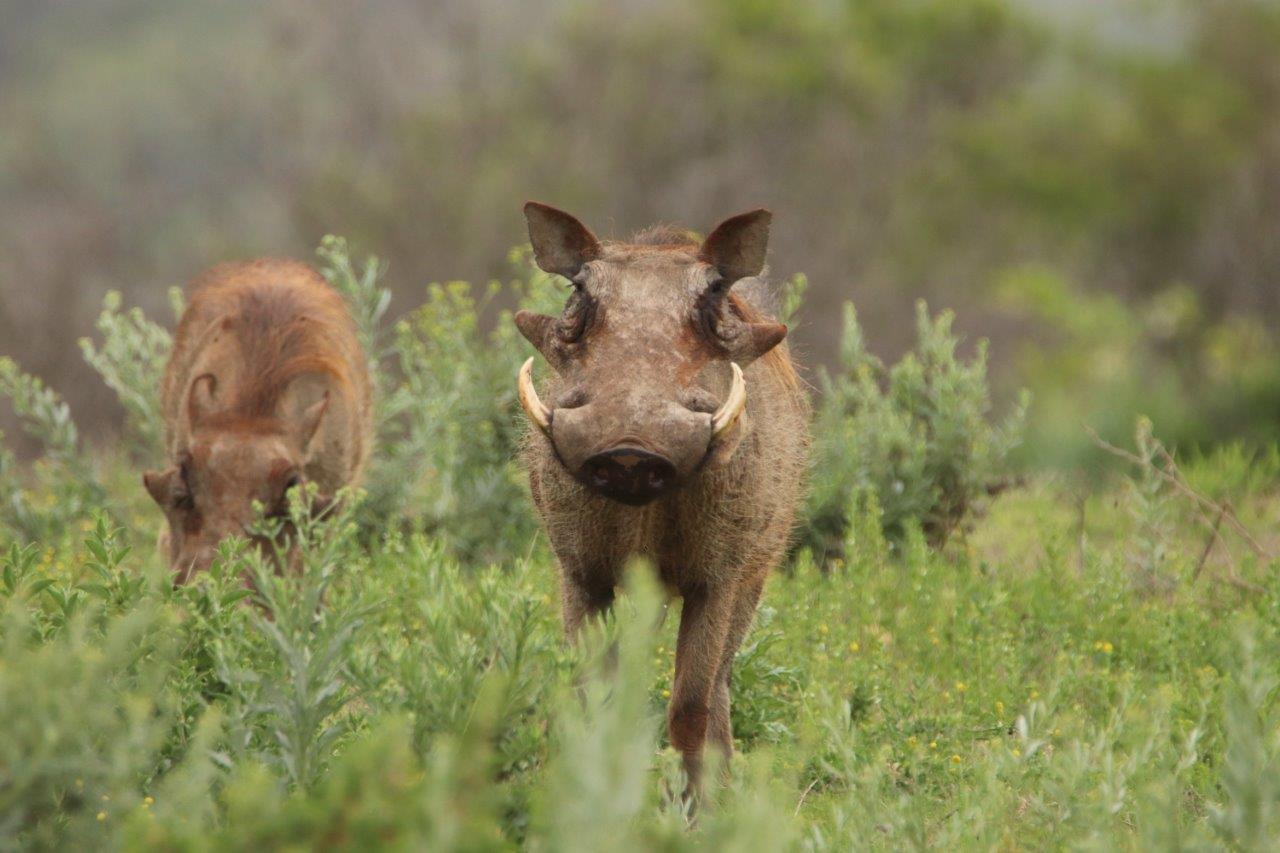 Many safari guests are amused to see a warthog run with its tail in the air. When one warthog runs with its tail up, the whole group does it too! This is actually an easy way for the warthogs to follow each other as they can easily see the tail, especially in long grass where the bodies of their friends might be hard to spot.

Warthogs are diurnal, which means they are active during the day and sleep at night. They usually sleep in an underground burrow to keep them safe from predators. They can dig these holes themselves but often use old aardvark or porcupine holes and redecorate them bit before moving in.

Warthogs have more than one burrow. We see them taking note of which ones they are closest to as they move through an area. As soon as the need arises, a warthog will dash into a hole and stay there until the predator has left and it is safe to come out.

These clever piggies also let the biggest warthog reverse into the hole last so that it can block the entrance with its large strong head, tusks and razor sharp teeth incase a predator comes sniffing around.

Warthogs mainly eat grass but will also dig for roots and bulbs. If they have the opportunity, they will scavenge on meat as they are omnivorous. They are often seen with their front legs bent when they are eating. 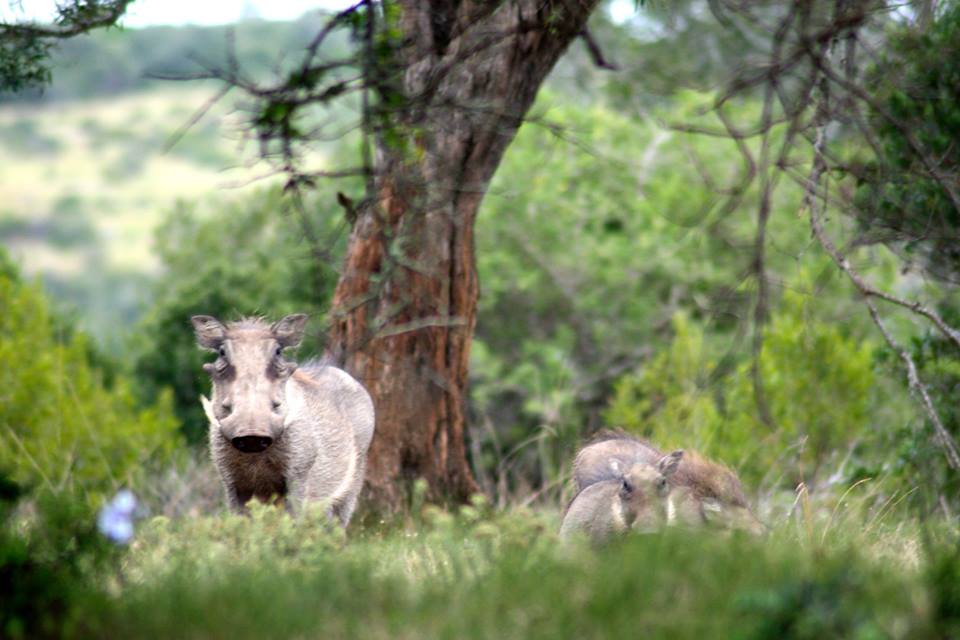 Did you see warthogs on your safari at Kariega Game Reserve? Did you notice their tails when you saw them running? Please share your photos and videos with us on Facebook, Twitter, Instagram and YouTube. We also encourage you to subscribe to our blogs via to ensure you never miss our updates!