On Monday the 25 March 2013, Kariega Game Reserve held a commemoration day for our two fallen rhino bulls that were poached this time last year. Kariega was also proud to celebrate Thandi's survival after being attacked by the same poachers who claimed the lives of our two bulls - Themba and bull no 84. Additionally the day ended with a silver lining, announcing the arrival of a new rhino calf on the reserve. To find out more about the story of Thandi and our two lost bulls, visit our blog "Kariega welcomes new rhino calf one year on from brutal poaching" .

The commemoration consisted of an introductory talk by Kariega General Manager, Alan Weyer, followed by a presentation by wildlife vet, Dr William Fowlds, and Brent Cook of Chipembere Rhino Foundation as well as Bruce Steele-Gray of Kenton Rotary Club. Dr Fowlds commented: "In recognition of 1 year today since we lost Themba, an event was held at Kariega to share in the passion which he and Thandi have inspired in people. So many amazing stories, about wonderful people who heard of a tragedy and made a decision to become part of the solution. What better way to end the day but to spend priveledged time in the presence of a new born baby rhino. And this is a special rhino calf in that she was conceived by either bull # 84 or Themba before they were brutally poached. Painful memories have been soothed at the site of her frolicking besides her proud mom."

The above video was incorporated in the presentation by Dr Fowlds. Please take the time to watch and share to get awareness out!

A day of commemoration

The following photo's were taken and captioned by organiser of the event, Jo Wilmot, of Rooting-for-Rhino's initiative. Thank you Jo for making this event such a success (and sharing these pics), and ofcourse for your amazing work to help save the rhino. 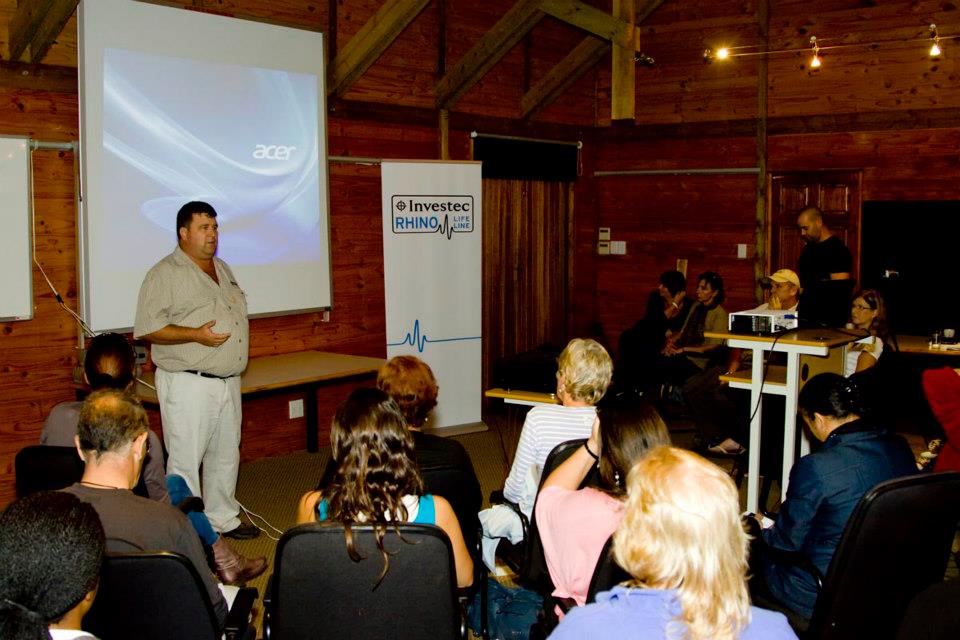 "Alan Weyer, General Manager of Kariega Game Reserve, welcomed and thanked everyone for their support over the last year and paid special tribute to Dr William Fowlds for his drive, passion, care and love for this species." 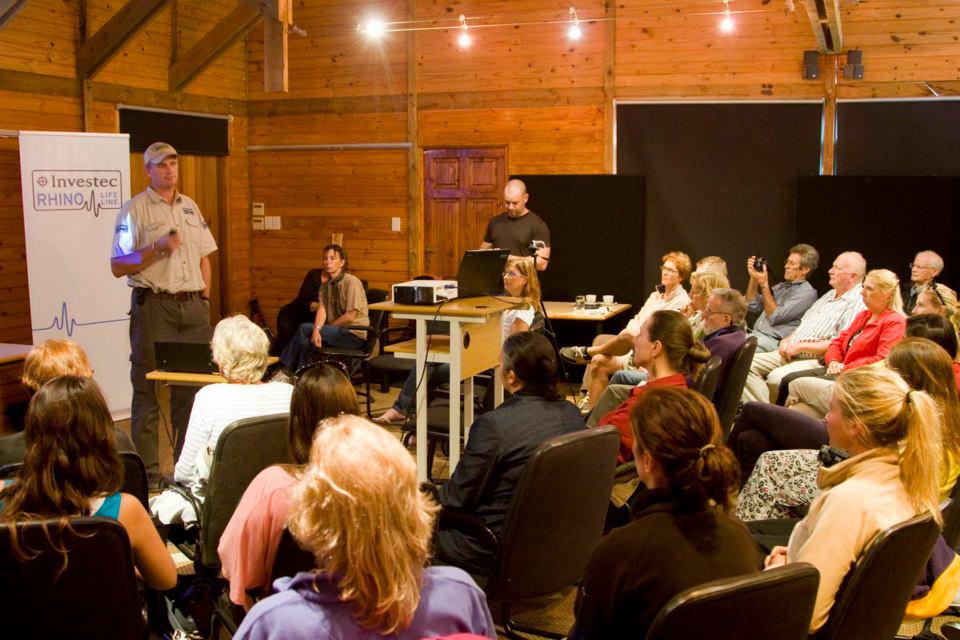 "Dr William Fowlds in action... He took us through so many stories of ordinary people making a difference in the fight against poaching. The question he is often asked is: “How can I help?” to which he replies” “What do you do?” One of the stories he told us was about Tracy Jeffery from Kisma & Co in Grahamstown has made 1,378 rhino tear necklaces by hand and these have raised over R27, 500.00 for Kariega in the last year." 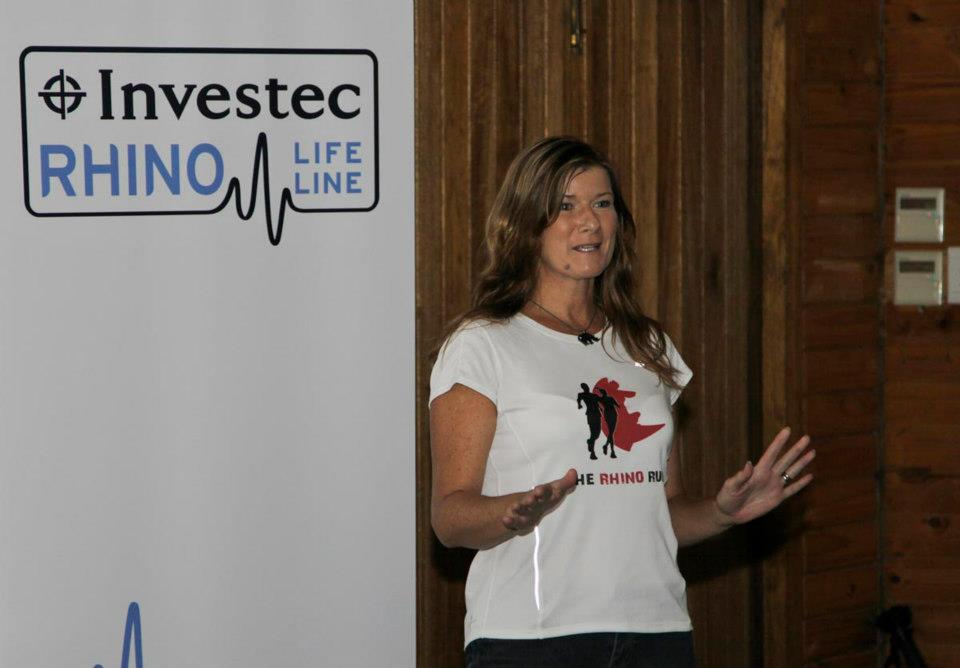 "Sheena O'Keeffe chatting to us. Inspired by the tragic poaching of the Kariega Three & the story of Thandi's survival, the Rhino Run raised R130,000 in 2012. This year the Rhino Run is hoping to stage 8 separate trail running events located around South Africa, each with 3 different routes, being run by hundreds of people with 1 voice - all happening simultaneously on the 22 September 2013 - World Rhino Day. Their mission - to raise awareness and funds through the South African and global trail running community for the war on rhino poaching." 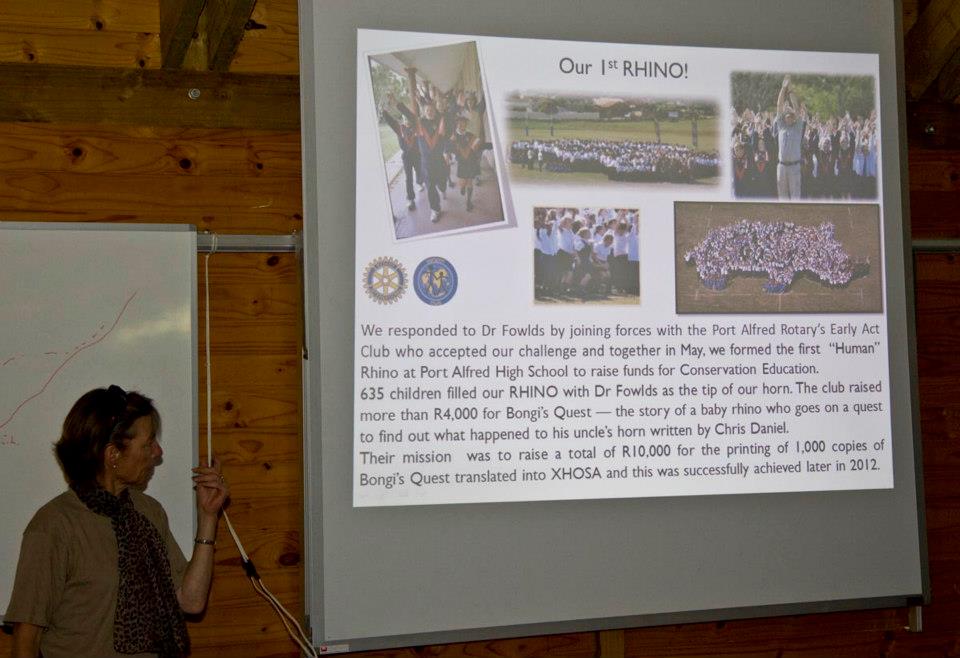 "Carol Harnwell for us on Rooting-for-Rhino! Our MISSION IS:
* UNITE people in the fight against rhino poaching
* Create international AWARENESS of our rhino’s plight
* RAISE FUNDS for the protection of rhino (Chipembere Rhino Foundation), the rehabilitation of survivors (The Rhino Injection Fund via Wilderness Foundation) & conservation education (Bongi's Quest)." 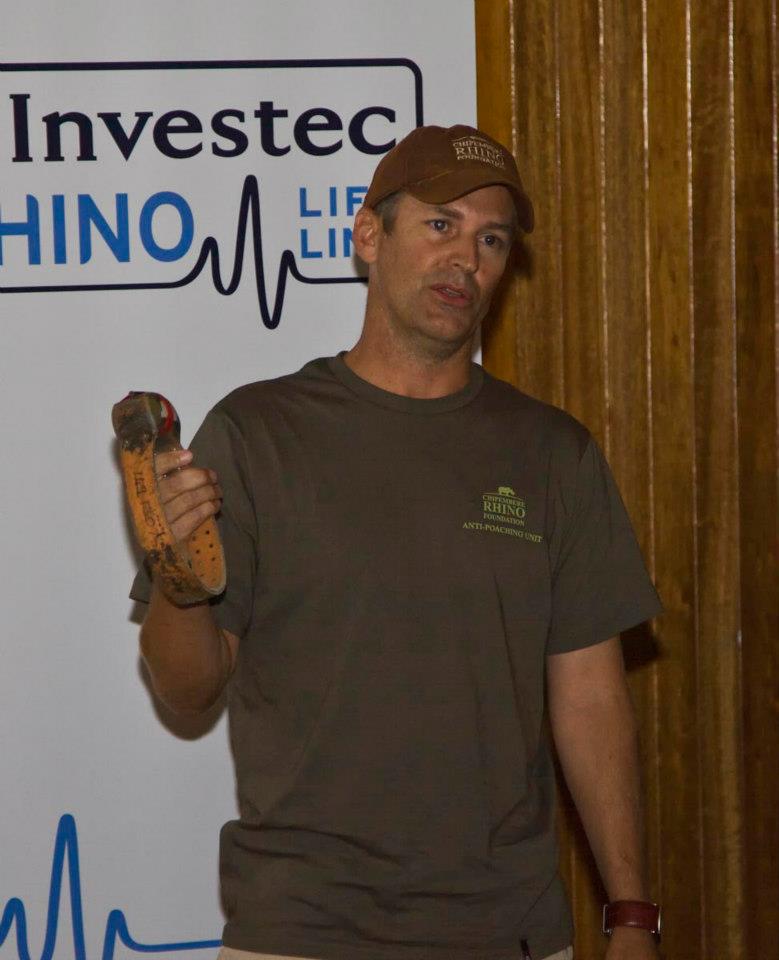 "Brent Cook from Chipembere Rhino Foundation holding the telemetry tracking collar that Chipembere donated to Kariega soon after the poaching... Chipembere donated another telemetry collar for Thandi as well as a GPS satellite tracking collar once she was on her road to recovery. The decision taken to treat both Themba & Thandi in the wild has been deemed the way forward as it reduces the stress levels on the rhino. However, it is critical to be able to locate these animals on a regular basis with technology. The Chipembere Rhino Foundation's focuses heavily on tried-and-tested monitoring equipment as well as on-the-ground equipment for anti-poaching units. Chipembere pride themselves on their ability to adapt to improved methods of protection of our rhino. They are a privately-run non-profit organisation committed solely to the conservation of rhino." 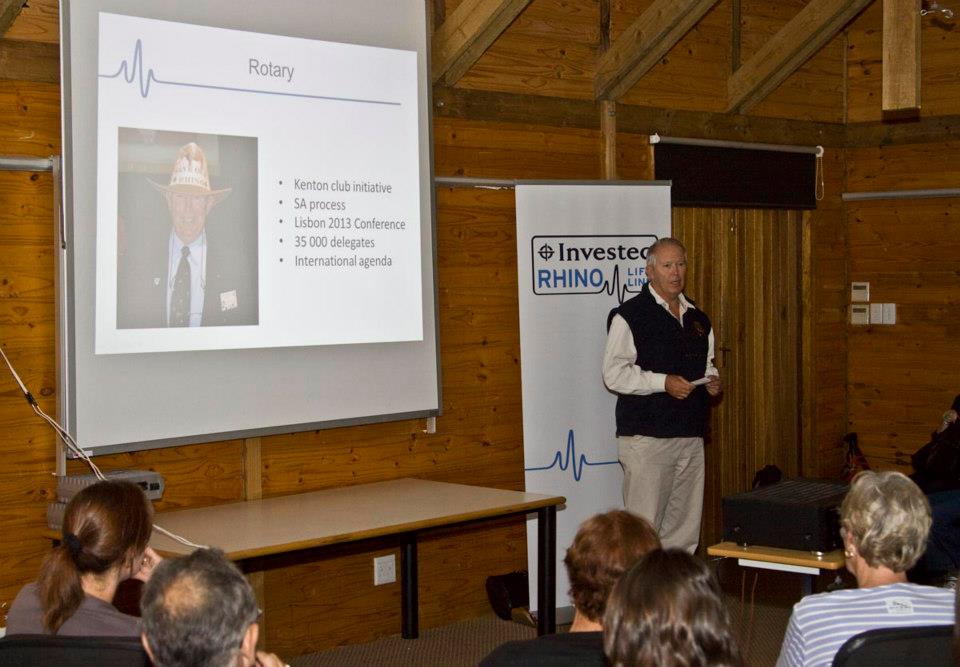 "Following the Kariega Three poaching, the Kenton Rotary Club asked Dr Fowlds to address them. Afterwards, the club asked Dr Fowlds what they could do. He responded as follows: "Take the plight of our rhino and share to it to the world." They took up the challenge and with their district's support, are going to the 104th World Convention in Lisbon in June where 3 delegates will be manning a RHINO CONSERVATION stand there to do just that!" 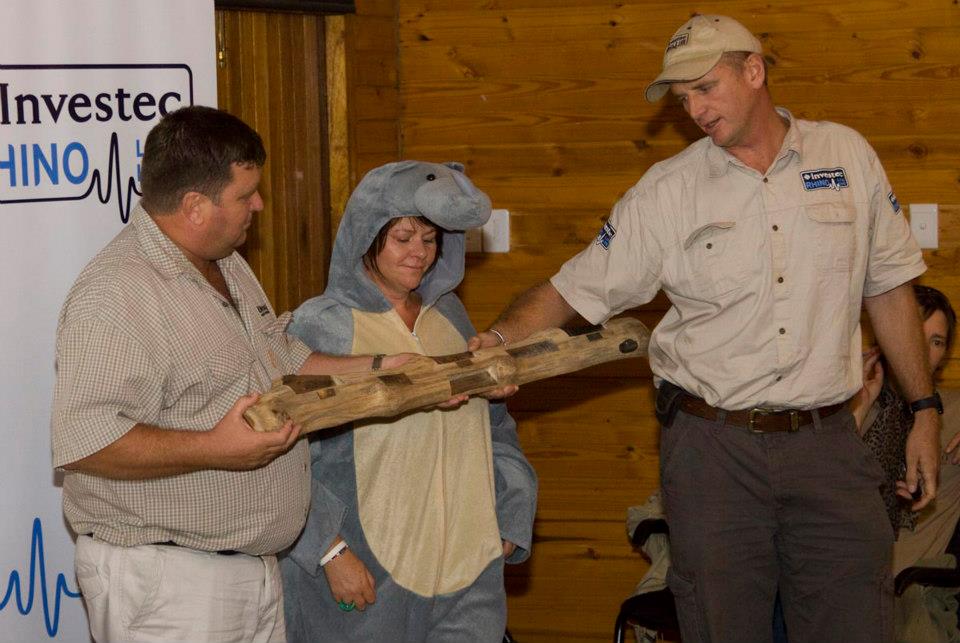 "The Rooting-for-Rhino remembrance plaque given to Kariega in memory of Broken Horn, Clint, Geza, Bull No 84 & Themba with love." "Alan, Azel Crous, the Kariega Volunteer Co-ordinator, who with the 1st roll-out of the Bongi's Quest in Xhosa conservation education drive, will help grow Bongi's Army at the school at Farmer Field, Kariega's sponsor school. A massive SHOUT OUR to all the schools who have participated in our challenge - you made this happen!!!" 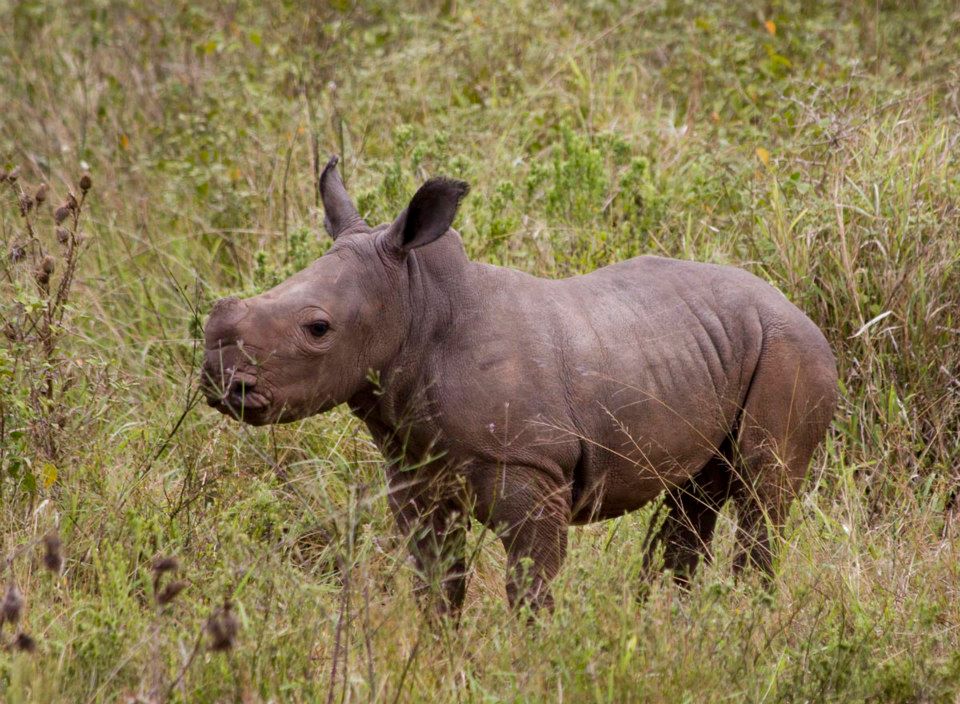