Kariega Game Reserve is a top safari and wildlife conservation destination in South Africa's Eastern Cape. The reserve, in collaboration with the Kariega Foundation, works to deliver on a broad and holistic wildlife conservation mandate and is dedicated to the protection and preservation of our natural world.

Environmental education is a critical component of this vision, and the Kariega conservation internship programme is designed to create the opportunity for Environmental Science students to complete their studies and take their place in the working world as advocates for wildlife conservation. Each year Kariega Game Reserve enrols four wildlife conservation interns who work in rotation between our anti poaching, wildlife management and community engagement departments.

This year the four Kariega wildlife conservation interns started on 4 January 2021. Two of the interns, Dawid Oosthuizen and Thomas Pitt, shared their experiences, and some beautiful wildlife images, from their first two months at Kariega Game Reserve. Dawid Oosthuizen writes, "After arriving at Kariega Game Reserve we had an orientation for the first two weeks. We drove around most of the reserve and visited the five beautiful lodges. We were also shown how to use the equipment and told what we will have to do during our internship.

We also enjoyed quite a few incredible wildlife experiences. One of these was when we heard that the lions had killed a buffalo. I went with another intern to see if we could take some pictures. We drove down into one of the valleys and through a stream. As we came around the next corner we saw the whole pride of lions in the road with the buffalo they had just caught. We arrived about an hour before the sun started to set. The male lions were already finished eating and were sleeping with bloody faces. The females and the cubs were taking their turn to feast on the buffalo. It was just an awesome experience to see these muscular animals enjoying the big catch they had made while the sun slowly started to set. Everything was going well until we got about ten meters away. Suddenly the young calf jumped up and ran straight towards me! I just stood there not sure what to do. The calf ran to about two meters from me and then suddenly turned away and ran in the other direction. The calf then started calling to its mother, who appeared from about three hundred meters away where she had been feeding in the bushes, and she ran directly to her calf!

We discussed this with the conservation manager and ecologist. He explained that this can sometimes happen when there are no predators nearby. A mother Cape buffalo may leave her calf on its own to sleep and then find it again later. After this incident we realised why buffalo are such dangerous animals as even from such a young age they are not afraid of humans at all. All of this is what makes it fun to be an intern, you never know what awaits you or what you will be dealing with the next day or even the next few hours. This just makes life so much more interesting. Working on Kariega Game Reserve also makes you see nature so differently, you realise that each species of plant or animal has its own purpose and they are all part of one big system of nature."

Unexpected and Memorable Wildlife Encounters of a Conservation Intern

Thomas Pitt shares his experiences: "Have you ever wondered what it is like working with nature on a daily basis? Well all I can say after working for my first month at Kariega Game Reserve is that it is all about unexpected wildlife encounters that can turn your day right around. From walking through dense hippo-infested vegetation to having your bread stolen by the infamous vervet monkeys, you will never know what your day has in store for you when you wake up.

My most memorable wildlife experience probably came in the form of one of the tiniest of creatures in the most unusual of places. One of my tasks for the week was to connect a single remote to the gates along the perimeter of the reserve. I decided that instead of driving to all of the gates that I would go to them individually whenever another task took me past that gate. After a long day of tracking rhinos, I was hot and tired and just wanted to get back to the nicely air-conditioned offices. However, there was still a gate on my way that I had not connected to the remote yet, and I therefore decided to make a stop on my way there.

Upon arrival at the gate, I lifted the box off of the motor, and right before my eyes was a little fluff ball, sitting snugly amongst the electrics. It was a little shrew, and although I startled him, he became quite friendly after a while and came out to show his face a bit more. It did make it a little hard to concentrate on the task at hand while he was running around and yawning as if to complain that I had woken him from his mid-day nap. I must admit that the encounter brightened my day, and I even came back to the same gate a few days later to see if he was still there. And to my surprise, he was. A second encounter involved one of the greater, more iconic species on the reserve. I was tracking the rhinos, as this is one of my daily tasks, and I found a group of them near a water hole. Seeming satisfied with completing my task, I decided to pull out my camera and take a few pictures of the big guys enjoying a good roll in the mud. Little did I know, I was actually sitting with my vehicle in the middle of the route they decided to walk to get to another little bit of water. And as such, engrossed by my camera, I didn’t notice that they were getting closer and closer, until eventually they were about five meters away. At this point, I put down my camera and just stared at the big female in front of me. She just stared back directly at me. I feared if I turned the car on that they would get a fright and charge the car. The only thing I could think to do was talk calmly in a soft voice to let her know I wasn’t a threat. Luckily she seemed satisfied with this and lumbered around the car to where she was aiming to go all along, with a trail of other rhinos following her. After this little encounter, I was more than happy to turn on the car and leave once they were a safe distance away.

Working at Kariega Game Reserve has been an amazing experience so far, filled with unpredictable events and unforgettable experiences." 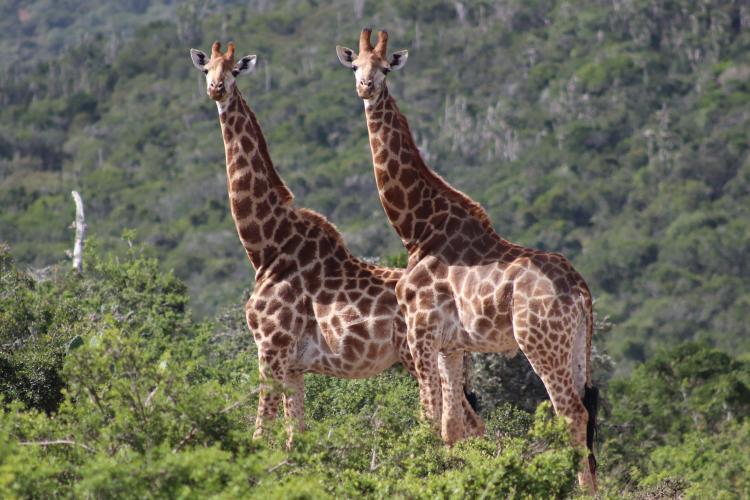 Kariega Game Reserve is a wildlife conservation safari reserve situated in the Eastern Cape of South Africa. Kariega spans across 10,000 hectares of pristine wilderness, and is home to the famous Big 5, as well as zebra, giraffe, hippo, multiple species of antelope and an abundance of birdlife. Kariega is a family-owned and operated private game reserve, giving it a warm and welcoming atmosphere.

Set on African plains with magnificent hills and dramatic river valleys this wilderness area combines spectacular and dramatic vistas with an abundance of African game and wildlife. Stay in one of the five lodges and enjoy a variety of land and water-based activities.

Kariega ecologist and conservation manager Chris Reynecke is responsible for managing the Kariega conservation internship programme. He comments: "Kariega Game Reserve is proud to be actively investing in future of conservation and conservationists. We are working to continually strengthen relationships in the greater conservation community and share our passion, commitment and experiences with a variety of generations."

Images thanks to Dawid Oosthuizen and Thomas Pitt.